Skip to content
7/10th scale Langurst Stuka Dive Bomber
This replica, referred to as a ‘Langhurst Stuka’ in reference to the its designer Louis Francis Langhurst, was acquired by the Big Easy Wing thanks to Jim Letten.   Jim called the owner, Mitch Sammons, and relayed the story of how he rode in the plane and was curious about its status. The owner, Mitch, told Jim he was going to sell or donate the plane. Jim suggested a donation of the plane to the National World War II Museum. When that did not pan out Jim contacted Harold Buchler because of his involvment in the newly formed Big Easy Wing of the Commemorative Air Force.  Mitch agreed to the donation and to cover the cost of shipping of the Stuka to the Big Easy Wing.

To provide some more background on this aircraft please visit these two sites: 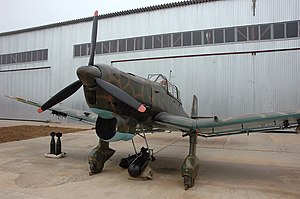